Data Driven SEO: What is Single Variable Testing and How Does It Affect SEO?

SEO single variable testing is the process of testing each individual ranking factor in a controlled and testing environment to see the real tangible effect of the hypothesized ranking factor in Google Search. Essentially we are scientists who are experimenting following similar steps to the scientific method to determine if our hypothesis is correct. The more we test, the more accurately we will be able to make changes that significantly increase rankings on Google. Which is exactly what we do at SEO With David we do SEO based on the facts using single variable testing and data in our process.

Implementing data-driven SEO through single variable tests is what separates an SEO enthusiast who just read an article on Search Engine Journal from an SEO scientist who studies, analyses, and practices what they preach. Let’s stop GUES-SEO and start making changes based on the facts. This way when you ask us how we know this is the right thing to do we can confidently back our response by the data and facts. Join us as we dive into the basics of single variable testing and how it affects SEO on a deep level.

What is Data-Driven SEO?

Looking back we remember when we first got into SEO? The excitement of something new and fun. An entirely new world of making money online using free traffic via rankings on Google. Fast forward to four months into our SEO journey we have read every single Brian Dean, Neil Patel, and Moz blog post on the internet. Leaving us at a loss completely confused about what is real and what is imagined. This is where data-driven SEO comes into our journey. Coming from where we started, our wish was to read an article about data-driven SEO to set us straight on the path to success.

For those who are not familiar with data-driven SEO, it is Search Engine Optimization only backing up an hypothesis not by an article found on Moz but by actual testing data. This means we or someone we have a close relationship with has done the testing that proves why we should always use H1 tags or H2 tags or anything else to do with SEO ranking factors.

What are Single Variable Tests in SEO?

Single-variable tests are the backbone of data-driven SEO following similar steps to the scientific method we need to personally test or have access to experiments that prove what we are saying.

Heres the scientific method for those who are too far removed to remember 5th-grade biology:

Since the study of science according to dictionary.com , “is the intellectual and practical activity encompassing the systematic study of the structure and behavior of the physical and natural world through observation and experimentation,” the study of SEO is essentially the same thing except studying the structure and functioning of the internet world on Google through observation and experimentation. The common misunderstanding many people, including myself, have when we begin SEO is that SEO is identical to marketing in general when, in fact, SEO is more than marketing; it is a science.

Single variable testing is not the type of thing we want to implement on our money sites because it is a slow and tedious process. Alternatively, we want to set up testing sites designed specifically for our single variable experimentation. This way we can determine the SEO ranking factors that matter in a controlled environment to later use on our clients and our money sites.

Discover the Secrets to Increasing Your Revenue and Market Share. Backed By $19 Million of Experience.

How Has Data-Driven SEO Changed the SEO Community? 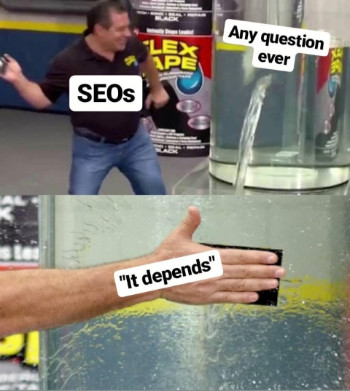 CORA has been around since late 2017, and since its creation, there have been several similar tools released, such as Page Optimizer Pro and Surfer SEO. We have implemented CORA software to make changes for our website David Buys Houses Florida and have seen impressive results for We Buy Houses Florida and many more keywords for our real estate investing company. This keyword alone would cost us $1,000,000 per year to bid top of the page for on Google Adwords.

CORA is the only SEO software that measures up to 880 ranking factors using correlation to determine which influence rankings most for keywords—then giving you the data on the exact amount of times to use each factor for the number 1 rankings to your KPIs and a high ROI. Not only has SEO software been incredibly influential in the SEO community for moving to data-backed SEO. Also, there are test groups, which are typically Facebook groups run by experts with proven reputations who are constantly single variable testing. Here are a few of the best groups to join:

These groups are where some of the top SEO scientific minds run live over the shoulders, case studies, and AMAs alongside the members. Joining these groups provides us with a significant edge over the competition and a data-backed understanding of SEO. They run live single variable tests in these groups; however, they can be pricey, ranging from $150-$400 on average. If you cannot afford to join the group, then you can always run single variable tests yourself.

How to Do Single Variable Tests in SEO?

Before we dive straight into single variable testing, we need to understand how the structure of experimentation works.

Step 2: Remove all other Variables

Variables are factors that can influence the results of our tests. For instance, if we want to test the effectiveness of H1s for specific keywords, then we want to remove every single other variable that may influence our test. Doing this, we will be able to effectively single variable test the H1 to determine if it is a ranking factor or not.

It seems simple in theory but much harder to do in actuality. We need to effectively compartmentalize and store data to demonstrate the results of our tests.

Similar to actual scientists as SEO scientists, we may benefit from having trusted peers review our data to prove the accuracy and point out mistakes we may have missed as a biased party.

Since you now understand how to structure the experimentation of single variable tests, you can move into running actual SEO tests. Check out this free PDF from SEO Intelligence Agency they have a step by step process of how to run accurate SEO single variable tests on your own.

There we have it folks we now understand what single variable testing is, the effects on SEO, the community, and how to do it. Sing up for a free 30 minute consultation below if you enjoyed this article and need an SEO agency that does SEO based on the facts not guess work.

Discover the Secrets to Increasing Your Revenue and Market Share. Backed By $19 Million of Experience.